Here you can read about the most important celebrations in Catalonia and the most significant elements of our culture.

Sant Jordi (Saint George’s Day) is one of the most important days in the Catalan calendar. It’s the Catalan equivalent of Valentine’s Day, and the Day of the Book. Although it isn’t a national holiday, activities and events take place all over Catalonia. Click on the following links to find out more about it:

The legend of Sant Jordi

La Patum de Berga – During Corpus Christi (end of May, beginning of June) 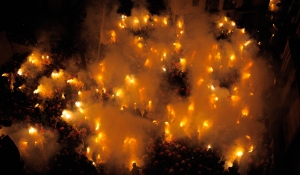 Sant Joan (Saint John’s Day) is cellebrated in many different countries, and Catalonia is one of them. Here’s what we do: [under construction]

This is Catalonia’s National Day, and commemorates the defeat of the Catalan army in 1714 against Spain (yes, we know it’s not very common to celebrate a defeat…). On the 11th of September 1714 Catalonia lost its independence and its rights, and we celebrate this day as a reminder of what we once were, in hope that some day Catalonia will get back its independent status.

For those who don’t necessarily support independence, the 11th of September is a day to celebrate our Catalan identity and people usually hang the Senyera (the Catalan flag) on their balconies, windows, etc.

Some people say that Castanyada is the Catalan Halloween, but basically they only thing they have in common is the date. Castanyada could be translated as “Chestnut festival”, so as you can see it’s more about chestnuts, rather than pumpkins 😉 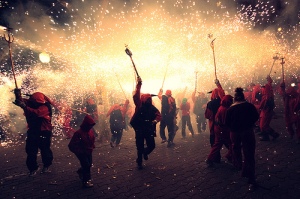 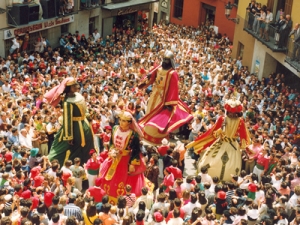